The previous modifications carried out on this car were on a different thread, but I thought I'd put a link here to keep all of the information on the transformation of this car in one place


The weather was nice yesterday so I thought I'd try out the Lemans hard top that came with my Viper. Well, lets just say it doesn't fit properly and that it's a bit out of shape, well no, that's not quite right, it's a lot out of shape!! I've got another roof that someone has offered to buy, but if that falls through then I may well start with that one and make it fit. 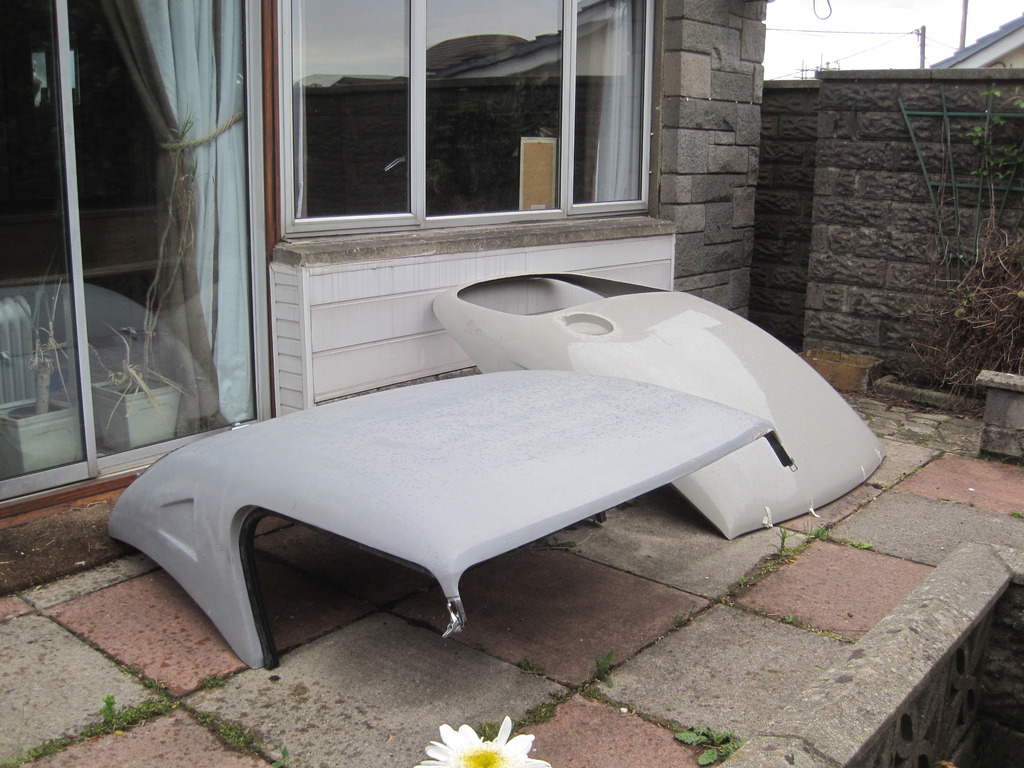 catsx11 wrote:Just had a thought Nige
I can see the top of the aperture is different both sides but, the cardboard cut-out of the Hawk Le Mans Hard-top you have is for a more steeply racked windscreen? - your screen rake looks 'standard'.
As I understand this is one of the differences with the Le Mans Cobras - their screens are pitched more shallow, (wind resistance).
I've seen a dimension from the top of screen back to the top of the rear scuttle somewhere.

Hi Alan, you're absolutely right, the screen on this is the original angle. The card cut out was to show the difference between the top corner curvatures. In the photo below you can see how the bottom edge of the roof tapers upwards towards the screen pillar, due to the screen not being altered. The dimensions of the distance between screen and rear scuttle wouldn't really help with this, as I think the rear scuttle is further forward than a Hawk. However, just the angle of the screen would be needed to fit the this top

In the photos in the previous post you'll see I added some tape to that area to see what it would look like if I were to lower that area and make it parallel to the door tops.

It's knowing how far to take things with this car to be honest. By the very nature of the base vehicle, it'll always be a bit of a compromise with things. I didn't really want to get into cutting the bootlid and making a split boot. If I were to rake the screen, I would need to modify my soft top to fit, which I also didn't really want to do. This hardtop has an opening tailgate, which again doesn't fit right, but it's all stuff that I can make fit with a bit of time effort and a cutting disc or two

. Do I bite the bullet, cut the boot, modify the screen and soft top, OR, fit this top, modify it to make it look right and not mess with the screen, bootlid and soft top, oh and get some money for the top?? Oh decisions, decisions, how far do I go with this car, that's the question?? The strange thing is, is that I really like this car. It drives lovely, handles well, doesn't squeak or rattle, is good on fuel and has reasonable performance. I have to keep remembering it's a stop gap car, but by the same token, the better I make it the more valuable it will become when resale time comes around.

Frankly I think that hardtop does not look good with an 'upright' screen.
https//fbhvc.co.uk
https//thesahb.com
Top

Roger King wrote:Frankly I think that hardtop does not look good with an 'upright' screen.


Hi Rog, this was the first time I'd seen it with the roof on and I tend to agree with you. I don't know what angle the Hawk is set at, but I know that Dave's (DB) has a slight amount of rake from stock, but not as much as a Hawk or original

catsx11 wrote:Too many options! and each has a knock-on effect else where!
For what it's worth, I did this screen trace of your photo above and brain-stormed this as an idea?… might mean head room inside will be an issue?
trouble is, like you say, the soft top will need altering as well!
but you have mentioned glassing in the top of the openings down a bit - which maybe less work!
excuse my over-engineered suggestion!

It has been extended downwards where it would come to the door edge, just as you've suggested trimming it there and it's been lengthened to meet the stock angle screen. I'll have to take a look at my soft top to see what's involved in shortening it at the front. I'll try the top on when I get a chance and see where it touches, or not aws the case may be

The build manual states that when fitting a Le Mans hardtop, the rake of the screen is adjusted to suit the hardtop. (Para 7)

(If I'm not here I'm in my workshop or on the golf course!)
Top
Post Reply
287 posts